One of the big challenges of parenting a toddler is dealing with defiance.  While this trait is an important part of toddler emotional development, frequent resistance is hard on parents, testing even the most patient nerves.
I did some reading on the topic in order to build my toolbox and understand this process (check out my  book review). I compiled some practical, positive strategies for getting a toddler to comply with parental requests. The motivation behind these techniques is to build a partnership, a partnership where both parent and child needs are taken into consideration. 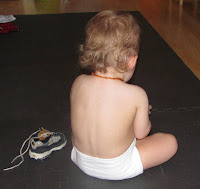 1.       Appeal to your toddler's natural empathy. Toddlers want to please, not hurt. Use phrases like "It hurts my ears when you... " bang on that, scream, etc., while covering your ears.  One of my favorites is "I can't understand you when you..."  whine, yell, cry, etc.  The effect is amazing! This strategy helps with compliance and it builds the toddler's ability to empathize by showing them how their actions affect others.
2.       If at first you don't succeed, try again in 1 minute.  Or 30 seconds, or 5 minutes, or hey, maybe even a whole 15 minutes. Often  toddlers refuse an initial request simply because they want to feel they are doing it of their own volition. If you allow time for her to initiate it on her own, she is more likely to agree to it. While waiting, it's important to be silent and not pester the child with your request. Sometimes a toddler is just busy doing something. If she is granted the respect to finish it, she is more likely to comply willingly with a request to do something else.  Yes, this one takes patience, especially if you're in a hurry!
3.       Provide an attractive alternative. If a toddler is holding an unsafe object, provide a safe replacement and make the exchange respectfully. If a toddler is engaged in an inappropriate activity, direct the toddler to another specific, acceptable activity.  At home, I keep a stash of 'special' objects that I can trade in a pinch. To get it back, I just wait 15 minutes for him to lose interest.  In public, there are usually countless activities and objects that can be used.
4.       Use humor and playfulness. For example, use exaggerated disbelief in response to a  peculiar  suggestion from a toddler. "I don't think the book needs to wear a diaper! How silly!" Play along. I have diapered everything from a toy car to a rubber band before actually putting a diaper on my son. Humor also helps dissipate frustration for both parent and child.
5.       Be emotionally available prior to your request. If you've spent the last hour on the computer, then suddenly ask a toddler to clean up his toys, compliance is less likely.  Try spending a few quality moments together before making your request. This can be as simple as a hug or a smile, or it may require a few minutes playing together. Of course, the connection must be genuine, heartfelt, and mindful.
6.       Enlist the help of your toddler. By encouraging a toddler to assist in a request, he will feel empowered and included in the decision-making process. If a toddler feels competent and independent, he is less likely to act defiantly in order to assert himself. For example, instead of coaxing my son to go into the house after a shopping trip, I ask him to help carry the groceries inside. Picking out shoes and putting items in the trash/recycling are other great toddler tasks.
7.       Say "gentle" instead of  "don't touch". Unless the object of  desire is truly threatening, let a toddler explore it. A toddler will quickly learn that "no touch" means it is dangerous to do so, not that it is annoying or socially unconventional to adults. The toddler learns to trust his parents' ability to protect him from harm, while his natural curiosity is nurtured.  He also learns to respect people, animals, plants, and objects through direct interaction with them. In addition, this approach helps develop motor control.
8.       Avoid using punishment for non-compliance. Overwhelming evidence shows that punishment does not help children develop empathy, including the desire to comply with someone else's wishes. Punishment also interferes with the development of an intrinsic desire to avoid inappropriate behavior. If a toddler is not punished for, well, being a toddler, then she is more likely to trust in parental decision making. She is less likely to feel that her parents are trying to control her or disregard her feelings. Instead, she is more likely to feel authentic respect for her parents, because they respect her. The result is a greater willingness to comply with parental requests. It is never too late to stop using punishment. There are alternatives to yelling, spanking, and time-outs.
I have to admit these techniques are easier to write about than put into practice. I think the important point is to keep looking for respectful ways of putting requests to children. What do you do? Do you have other gentle strategies for getting your toddler to cooperate with your requests?
Of course, these techniques don't always work. Sometimes you have to do more. But that is a subject for another day...

There is a joke about toddlers that goes something like this: "If it's in my hand, it's mine. If it's in your hand and I want it, it's mine." That's a rather cynical and narrow-minded view of toddler mentally that I totally disagree with. A more accurate and positive view begins with the recognition that toddlers are curious and that they learn about the world through hands-on interaction. They don't really understand ownership. They are able to take turns if you step back and allow them to do so on their own.
Preverbal toddlers can only use toddler body language to ask permission.  A preverbal child can't ask another child if she can have a turn with the toy in his hand. It is absurd that adults hold them to this standard. Instead of asking, a preverbal child will approach the other child, grasp the object, and attempt to take it into her own hands. If it comes away easily without tears or fussing on behalf of the initial holder, then permission has been granted by the holder, nonverbally.  If the initial holder of the object grasps more firmly, cries, or wails, then he was clearly not done having a turn with it. The second child will either have to wait her turn or face the reality that her actions caused another child to cry.
Toddlers are very sensitive to the pains of others, and they can learn to be empathetic if we allow them the chance to practice it. Once an adult steps in, however, neither child is given the opportunity to learn about sharing. The initial holder doesn't get the chance to assert himself or to share. The other interested toddler doesn't get to learn how ask for a turn. She doesn't learn that her actions affect others, she only learns what happens to her (verbal scolding, time-out, or having the object taken away by an adult). Either way, adult interference seems to interfere with the very lesson we are trying to teach.
Putting this philosophy into practice actually works. I have been doing this with a friend of mine who shares my confidence in a child's ability to learn about sharing. Our preverbal toddler boys are close in age, and when they interact, we don't interfere. We are there to provide comfort to hurt egos or step in if either one of them is in danger. These little boys pass toys back and forth. They take toys away from each other, non-aggressively, and without incident. Occasionally, one of them gets upset or there is a moment of tug-o-war. But it passes quickly. Peaceful interactions resume as before. They resolve it. By themselves.
2 comments: Links to this post

Email ThisBlogThis!Share to TwitterShare to FacebookShare to Pinterest
Topics: Sharing

There was a time when I felt I had to do something huge in this world in order to make a difference. I thought I had to go out into the world, stir things up, start a company, become an activist, become influential. I thought only famous people could contribute to lasting global change.  I thought it took credentials, prestige, connections, and a really great CV. 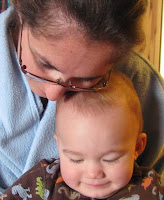 Then I became a mother and I began to see the truth. Parenting is the most important contribution an individual makes to the world. Mothers in particular have an influence on their child that is more profound and long-lasting than almost any other.  In the world of animals, there is no social bond stronger than the maternal-offspring bond among mammals. As a biologist,  I knew that was true on an intellectual level, but it took becoming a mother myself to recognize the real significance of that fact.  Certainly, all those famous and important people are essential to improving the planet.  But parents  -- and especially mothers -- play a critical role in what the world will look like tomorrow... a world filled with their offspring.
Today, I am honored to have this great responsibility.
2 comments: Links to this post